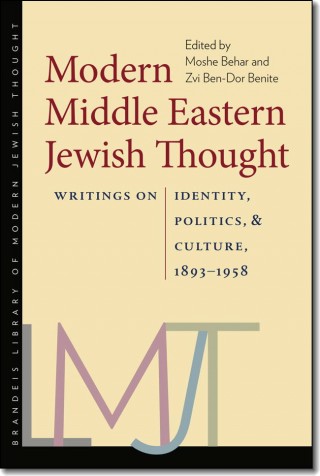 The vast scholarly field of Modern Jewish Thought usually ignores the intellectual history of Jews of non-European origin who are indigenous to the Middle East. The anthology Modern Middle Eastern Jewish Thought: Writings on Identity, Politics and Culture, 1893-1958 (University of New England Press, 2013) assembles some three dozen essays authored by Middle Eastern Jewish intellectuals in Hebrew, Arabic and French. The collection posits that a distinct Jewish intellectual school that understood itself unambiguously to be Eastern in its socio-political orientation has been in vibrant existence since the beginning of European Zionism in Ottoman Palestine. The lecture offers critical reflections on this little known intellectual history and school. In his book presentation, co-editor Moshe Behar will highlight socio-political paths not taken in the trajectory of the Palestine/Israel question in the 20th century while assessing their possible relevance for Arab-Jewish relations in the 21st century.

Moshe Behar holds a PhD in Comparative Politics from Columbia University in NYC and is Senior Lecturer in the Department of Middle Eastern Studies at the University of Manchester. His teaching and publications revolve around the phenomenon of nationalism in the Middle East, the Arab-Israeli conflict, the Palestine/Israel question and Arabized-Jews/Mizrahim.