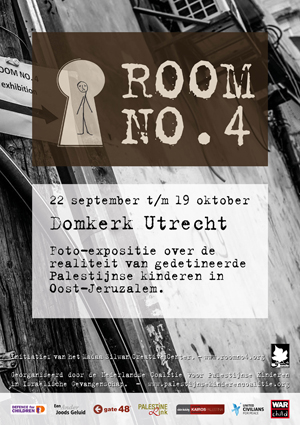 Photo exhibition about the reality of detained Palestinian children in East Jerusalem.

Hundreds of Palestinian children are arrested every year in conditions that are not appropriate with their age and that are in violation of Israeli and International laws. The methods and duration of arrest and interrogation are directly reflected in the behavior and actions of the children as they become moody, nervous, impulsive and at times violent. Children also suffer from depression which can take several forms such as crying, fear, confusion, complaints about pain and lack of confidence, in addition to a sense of insecurity. Once children have been released, they are likely to fall behind at school, not able to catch up with their fellow students. This often results in school dropout.

Room No. 4 is an interrogation room in the Russian Compound—the main Israeli police office in Jerusalem—where Palestinian Jerusalem residents, including children, are investigated.
Room No. 4 is where many of the abuses described by Madaa Silwan Creative Center report “The Impact of child arrest and detention”—published in 2012—take place. The report analyses the findings of 30 interviews with children from Silwan, aged between 7 to 17 years old, who were arrested and detained.

Room No. 4 campaign illustrates the reality faced by the children when arrested and detained and is based on the children’s testimonies in the report.

To see the exhibition: www.roomno4.org

The exhibition in the Netherlands is organized by the Dutch coalition of Palestinian children in Israeli detention.