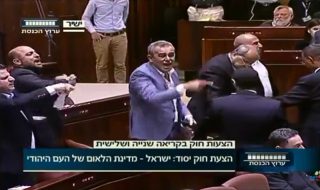 Israel’s recent ‘Jewish nation-state law’:  the threat it poses to democracy in Israel and the prospects of a just solution in Israel Palestine.

In July 2018 the Israeli parliament passed the ‘Jewish nation-state law’ (with a tight majority of 62 for and 55 against). This Basic Law enshrines Israel, for the first time, as “the national home of the Jewish people”. It also declares that Jerusalem is the capital of Israel, and sets Hebrew as its official language. In other words, the law confirms that only Jews have the right of self-determination in Israel, and ignores the rights of non-Jews, especially the 20% Palestinian native population.

The law was and is heavily criticised both in Israel and abroad. Its criticizers include Israeli President and former Likud member, Reuven Rivlin; head of the Israeli Arab Joint List, Ayman Odeh; office of EU foreign affairs chief, Federica Mogherini, and the president of the Union for Reform Judaism, which represents the largest Jewish denomination in the US.

During this event the speakers will discuss the influence of this law on Israeli democracy at large and more specifically on the effects on minority groups in Israeli society. We will also discuss whether and how this new anti-democratic legislation threats the prospect of just solution in Israel Palestine.

The discussion will be in English. Tickets: €5. Free entrance for students.

The discussion is organized by gate48 – critical Israelis in the Netherlands and FFIPP NL– Educational network for human rights in Palestine/Israel.