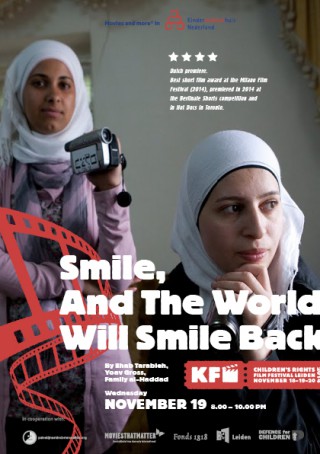 Smile, And The World Will Smile Back – film & discussion

Dutch premiere, Smile, And The World Will Smile Back, at the Children rights film festival in Leiden.

Best short film award at the Milano Film Festival (2014), premiered in 2014 at the Berlinale Shorts competition and in Hot Docs in Toronto.

One cold December night, soldiers knock on the door of the Haddad family in Hebron. They have come to search the house. Teenage son Diaa films the search. The father takes over the camera when Diaa is ordered by the soldiers to face the wall outside. The soldiers do not want to leave until Diaa stops smiling.

By Defence for Children Palestine (2012)

Palestinian children in Israeli military detention testify about their treatment by the Israeli army.

Linda Vogtländer, child and adolescent psychiatrist, member of a Dutch multidisciplinary group of experts that published the report ‘Palestinian children and military detention’ (2014)

This screening and discussion is organized in cooperation with the Dutch coalition for Palestinian children in Israeli detention, Movies that Mater, Fonds 1818 and DCI NL.