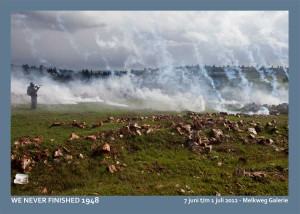 We never finished 1948 displacement in Israel/Palestine

Photo Exhibition by the Acivestills Collective.

Many Palestinians who were made refugees in 1948 and 1967 are displaces again through internal displacement, a form of forced population transfer, which is a clear violation of international law.

In 1948 and through subsequent years, more than 530 Palestinian villages, towns and urban neighborhoods were systematically demolished by Israel, and 150,000 Arab citizens of Israel continue to live in 100 so-called “unrecognized villages”, susceptible to ongoing and repeated demolitions by the Israeli authorities.

Few Israelis visit Palestinian villages and towns except as soldiers or settlers, and few are interested in what happens to the people living under occupation, be it in the Occupied Territories or within Israel. An important factor in the lives of Palestinians is displacement as a result of forced transfer which started in 1948 and continues till this very day.

For Activstilles the ongoing Occupation is not merely an event arising out of the 1967 war, but a continuation of 1948.

The Activestills collective was established in 2005 by a group of Israeli and international documentary photographers, out of a strong conviction that photography is a vehicle for social change. The work of Activestills raises awareness on issues that are generally absent from the public discourse in Israel. The collective consists of ten photographers who work in Israel/Palestine and focuses on social and political documentation, publications and exhibitions. Activestills often uses public space for exhibitions in order to more directly influence public opinion and bring about social change.