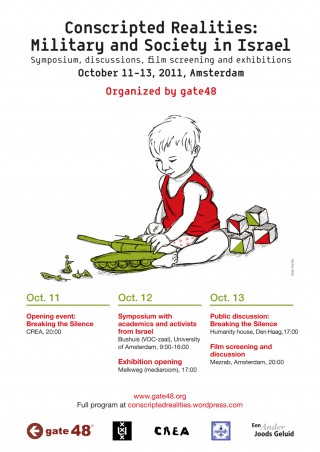 During three days of discussions, exhibitions and ﬁlm screenings, gate48 would like to introduce innovative perspectives on the militarization of Israeli society and culture. Militarism is part of everyday life in Israel, closely linked to the ongoing reality of armed conﬂict and occupation. As a result, militaristic approaches to the conﬂict have become dominant, while feminist critiques and other alternative voices have been ignored or dismissed. Conscripted Realities aims to bring forth these voices in order to examine how the military and civil society interact in the formation of the national subject. Academics and activists from Israel will discuss the topic from various angles, including the economic aspects of militarization, the militarization of education and media, and the effects of militarization on gendered and ethnic minorities in their struggles for equality. The symposium is accompanied by a digital exhibition “Making Militarism Visible”, curated by the Israeli feminist organization New Proﬁle. The exhibition reveals the subtle but strong inﬂuence of militarism on Israeli popular culture.

20:15 – 22:00 | Breaking the Silence: Testimonies of Soldiers from the Israeli Occupation

Dr. Orna Sasson-Levy, Chair of the department of Sociology and Anthropology, Bar-Ilan University:

Militarism from a Gendered Perspective: The Meaning of Military Service in Israeli

From “No Pride in the Occupation” to the Current “Pinkwashing” Debate: LGBT

Politics and Militarism in Israel

Chair and discussant: Aylin Kuryel, PhD candidate at the Amsterdam School for

Evolutions of Israeli Control of the Palestinian Population: From Checkpoint to the New Privatized Crossing

How to use Occupation Skills for a Proﬁt: Israeli Combatant Experience as a Brand

17:00 | Breaking the Silence: Testimonies of Soldiers from the Israeli

Discussion with Noam Hayut, co-founder of Breaking the Silence