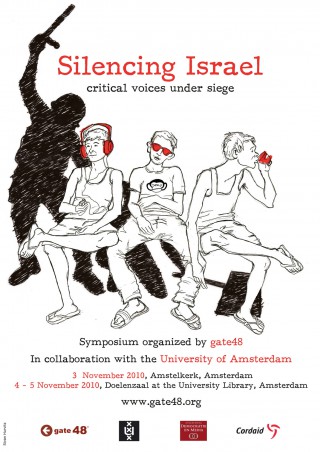 While Israel is often referred to as “The only democracy in the Middle East”, it has always been a rather partial democracy, mostly restricted to its Jewish majority. During the last decade there has been a serious and consistent decline in the democratic standards to which Israel claims to adhere, particularly since the attack on Gaza in 2009. Increased attacks on the freedom of expression in Israel include among others: delegitimizing the of work of Human Rights activists; the detention of demonstrators by police during legal protests; and the “invitation” of human rights activists for cautionary talks with the  secret security service. Additionally, the Israeli parliament is pushing for a series of new legislations that aim to revoke the rights of the Palestinian citizens of Israel, as well as other Israelis who are “not loyal to the country”. Disturbingly, most of these undemocratic measures are widely supported by large constituencies and Israeli society at large. In 2009, a survey published by the Israeli Institute for Democracy indicated that 54% of the total population agrees that “only citizens loyal to the state are entitled to civil rights”.

Israel has never been a full-fledged democracy. For more than sixty years it has treated Palestinians in Israel as second class citizens, and for forty-three years it has occupied the territory of millions of Palestinians in the West Bank and the Gaza strip who go without any rights. To date, almost half of the population under Israeli control has no citizenship. The rights of many citizens, members of ethnic minority groups as well as Jewish human and civil rights activists, are now under threat more than ever before.

Human rights organizations and concerned activists represent a hope that one day Israel will be a democracy for all. With the rapid changes in the ‘democratic climate´ of Israel, this hope is swiftly shifting to despair. By bringing together activists and researchers, this symposium examines the anti-democratic forces at work, those targeted by them and those resisting them. It will furthermore consider the possible contribution of international awareness and engagement.

The symposium is organized in cooperation with the University of Amsterdam, Democratie en Media and Cordaid.

20:00 |The Criminalisation of the Political Act

The Struggle on Israel’s Democratic Space and What Can Democrats Abroad do About That.

Threats to dissent in Israel: Silencing opposition through law and incitement.

Dr. Erella Grassiani: Lecturer at the VU University Amsterdam, and board member of gate48.

Galit Eilat:  Writer, curator and the founding director of the Israeli Center for Digital Art, Holon, and research curator at the Van Abbe Museum

Freedom of Expression and Whom it Serves

the State of Affairs in Israeli Academia.

Ethno-Nationalism and the Closing of the Israeli Intellectual and Public Mind.