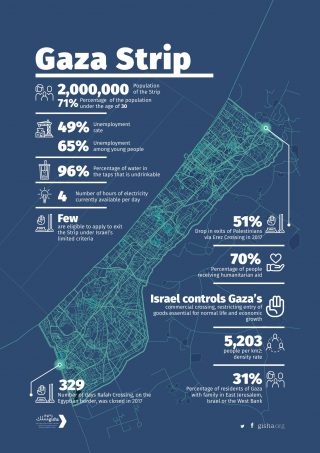 No new war in Gaza

…and yet another deadly round of fighting in Gaza

It is a well-known but easily forgotten fact: the Gaza Strip is a disaster area where living is almost impossible. The Israeli decade-long siege and blockade created an area controlled by famine, death and despair. Since the beginning of 2018 almost 200 Palestinians were killed in Gaza by Israeli forces.

Yesterday afternoon, another senseless round of fighting has started, following a failed covert Israeli operation inside Gaza the day before. Since yesterday, both sides are shooting at one another, threatening the lives of civilians. By now this unnecessary escalation has already costed the lives of 6 civilians.

Just two days ago (at a press conference in Paris), PM Netanyahu rejected the possibility of any political solution to the situation in Gaza as long as Hamas is ruling. Today, Israel refused to cooperate with the mediation offered by the UN and Egypt. The current political climate, where the Israeli prime minister is fighting for his political survival while being supported unconditionally by president Trump, leads to a limbo reality of perpetually repeated violence that costs the lives of thousands and seems unending.

But there can be an end to the circles of violence. A clear intervention by the European Community, demanding Israel to lift the siege on Gaza, can change this cynical loop of lethal violence and political opportunism that prevents both people from prospering. A ceasefire is urgent, but not enough; and no humanitarian gesture will do. We need a political solution. We need to end the siege.