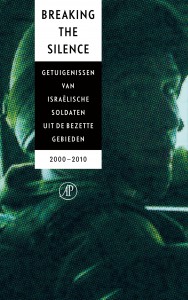 Launching The Dutch Translation Of The New Book Of “Breaking The Silence” with the co-founder of the organizetion Yehuda Shaul.

Breaking the Silence is a human rights organization that was founded in 2004 in Jerusalem by Israeli veterans to record testimonies of soldiers who have served in the occupied territories. After the controversial photo exhibitions that were shown internationally before there is now a book. This is the first book in which veterans speak freely about the actions of the army in the occupied Palestinian territories and the underlying strategic objectives. Their testimonies undermine the idea that the Israeli army operates purely defensive, and hence put forty years of acceptance of Israeli policy by the public for discussion. The book will be introduced this evening by Yehuda Shaul, who is a veteran himself and one of the founders of Breaking the Silence. He will talk about the making of the book and show testimonies from soldiers on video.