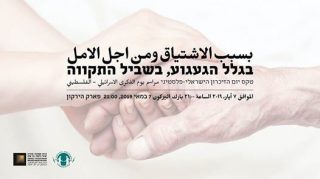 Since 2005, the Israeli-Palestinian NGOs Combatants for Peace and the Parents Forum have been organizing a joint, inclusive ceremony for Israeli-Palestinian Memorial Day in Tel Aviv. The goal of the event is to challenge the consensual narrative and offer an alternative that denounces war and contests the legitimacy of violence. In the last few years, the organizers have been encouraging screenings and satellite events in cities throughout the world.

This 7th of May, gate48 in cooperation with AUC (Amsterdam University College) and FFIPP-NL (Educational Network for Human Rights in Israel/Palestine) will live-stream the ceremony in Amsterdam. We invite you to join us for the screening of this unique event and for a conversation about inclusion and non-violent resistance in present day Israel/Palestine.

The event will be moderated by Erella Grassiani and Hilla Dayan, co-founders of gate48.

On the 7th of May, Israel will celebrate Yom Hazikaron, its official Memorial Day. It is an incredibly significant day on which Israel honors its citizens who lost their lives in battle as well as victims of political violence. It is a solemn, national holiday and considered one of the most important days for Israelis. Official commemoration services are held in the presence of Israel’s political and military leadership and private memorial gatherings take place in cemeteries where soldiers are buried. These events have become a powerful tool for shaping a collective narrative of sacrifice – honoring the fallen for the “greater good” of the country. These ceremonies often justify the political status quo and provide a platform for patriotic nationalism and a one-sided narrative. The traditional commemorations ignore the fact that violence has taken the lives of thousands of both Israelis and Palestinians over the years.

The Israeli-Palestinian Memorial Day Ceremony, by way of music, personal testimonies and speeches, commemorates the victims of the conflict on both sides and sends a clear call for action towards ending the conflict in a just and peaceful way. This unique event has become a tradition and is commemorated with Israelis and Palestinians together. The audience has grown and includes many segments of Israeli society who are willing to think about a new way for ending the perpetual conflict. This encounter with the other side, on a day so painful, opens a window that envisions a cessation of the fighting and a better future. The ceremony directs the energy and hope of the audience towards political activism.

Combatants for Peace is an egalitarian Israeli and Palestinian organization of ex-combatants, who are determined to struggle for peace and for a viable independent Palestinian state. Our members have chosen to take the path of nonviolence, as the only sensible way out of the conflict. The Ceremony is its flagship project.

Niece of Yonatan Shomroni who was killed in 1974 when serving on a pilot course in the Air Force.Grandchild of Avraham Shomroni,Yonatans father,

Tamar is active in “Young ambassadors for Peace”.

connected to the  Forum of Bereaved parents

Friend of Abed El-Rachaman who was killed in 2015 during  confrontations in the refugee camp. Muchamad is an actor in the Combaters for Peace Theatre Group

Performers (not finalized yet):